The main individual weapons of the French paras. Part 4

There are 2 main types of French grenades, the Offensive Grenade model 1937 and the Defensive Grenade 1937. Both have an effective range of 30 m and external colors identifying their type of explosive. They are either all yellow or with the bottom part in red.

The Offensive Grenade model 1937 (OF37) is not a fragmentation grenade but use the blast to incapacitate the enemy in a 10 m radius of the point of impact.

The Defensive Grenade model 1937 (DF37) is a fragmentation grenade, lethal in a 5 m radius, and very dangerous up to 50 m.

The WW2 US Mk2 defensive grenade is also very common. It is a fragmentation grenade, color olive drab, and with a lethality similar to the French DF37. 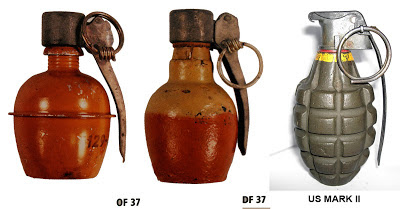